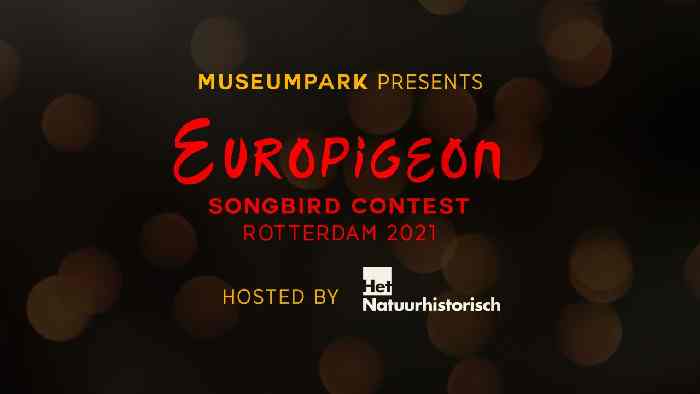 One of the most defining elements of each year's springtime is the chorus of singing birds. And now, for the first time, this dazzling outdoor concert is about to reach it's mindblowing climax: The Europigeon Songbird Contest.
Five feathered performers will take part in a truly spectacular song contest. Their shows will be shown online for you to enjoy, Covid-19 and bird flu proof.
You can decide who will win this year's Europigeon by voting for your favorite songbird. Will it be Philomelos, the Song Thrush? Or will you dance to Starling's beats and tricks? Who will be... top of the bill?
Voting ended on Saturday, the 22nd of May 2021 at 10:00 CET (Rotterdam). The winner of the contest was announced subsequently during the radio broadcast of Spijkers met Koppen. With 32% of all votes Philomelos, the Song Thrush became the official winner of the Europigeon Songbird Contest 2021. A memorable victory!

Who is going to win the Europigeon Songbird Contest 2021?

The participants:
Starling (Sturnus vulgaris)
After some controversy involving several copyright claims by other songbirds, we are proud to announce that Starling will definitely take part in Europigeon this year. This glamorous cover artist is well known for his disco sounds and beatboxing rythms, interspersed with original and 'borrowed' sounds and samples. Will this long time crowd favorite take it to the stars?
Wren (Troglodytes troglodytes)
We've come to know this little temperamental  singer as a real energizer. Although he isn't the one for glitter and glamour, Wren truly knows how to lift our spirits with his marvellous shows. His characteristic stutters and rolls never cease to amaze us. Bring it on!
Robin (Erithacus rubecula)
Robin is in a class of her own. She's the only lady in this year's Europigeon, but what a lady she is! This well known and talented singer made an earlier and very succesful career as a model for Christmas cards. But when the love of her life left her, she turned to singing. Now, her songs tell the tales of the broken heart. By doing so, she turned her sorrow into her strength. Will it also bring her first place?
Philomelos (The Song Thrush)
If melancholy ever had a voice, it would be this one. This powerful singer manages to cut straight into our hearts with a delicate mixture of love, joi de vivre and an infinite sadness. Philomelos finds his inspiration in the beautiful French summers, where he loves to spend time enjoying grapes, snails et l'amour.
Krameri P. (Rose-ringed parakeet)
This Africa based artist is the newcomer on the block. His extravagant brightly coloured costume matches his dashing singing performance in which he combines groovy croaking calls with traditional African soul melodies. A splendid crossover style that really gets the party going.
Credits
Europigeon Songbird Contest is an initiative by the Museumpark museums, produced by Natuurhistorisch Museum Rotterdam
Video's by Niek Hilkmann
Technical assistance by Susanne de Kraker
Concept/Production by André de Baerdemaeker
Support by Jeanette Conrad (Het Natuurhistorisch)
Additional support by Sabine Parmentier (Kunsthal)
Europigeon Song Bird Contest is part of Stadsprogramma Host City Rotterdam, Eurovision Song Contest 2021 and is made possible by a financial contribution from Port of Rotterdam
The Museumpark Museums are:
Museum Boijmans Van Beuningen
Kunsthal Rotterdam
Het Nieuwe Instituut
Natural History Museum Rotterdam
Chabot Museum Rotterdam

You need to have access permissions to view the results for this poll. If you are the creator of the poll then you will have been given a special access link, or you can login to your account to view results for all your polls.

If you are the poll creator and have lost your access link you can still retrieve your results by signing up for a free account at www.poll-maker.com and then clicking on 'Claim Poll' from your Account Dashboard.

Please contact the poll author to see the geographical breakdown.

Comments have been disabled for this poll